TORONTO – Sleep Country Canada Holdings (SCC) has named company veteran Stewart Schaefer as president of its Sleep Country banner, who will also continue to serve as president of Dormez-vous, its banner in Quebec. He succeeds Dave Friesema in the role, who remains the parent company’s chief executive officer.

In a statement, the publicly held bedding retailer said his expanded role will see him spearhead the company’s strategy moving forward, noting his presence in sleep retail have been ubiquitous for the past three decades. Schaefer most recently served as SCC’s chief of business development and in that role was a key architect of its enhanced service model and omnichannel transformation. 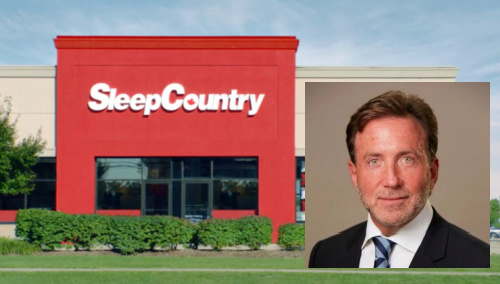 “His vision and determination pioneered new concept stores across Canada, launched and quickly expanded the company’s accessories business and deftly navigated its journey into e-commerce,” the statement read. “In addition, he secured innovative partnerships with the world’s most renowned sleep brands including Simba, Malouf and Purple, and boldly drove the acquisition of Endy – Canada’s leading online mattress brand.”

“On behalf of the board of directors, we are proud to announce Stewart’s promotion to president. It is the natural next step following the immeasurable impact he has had on our business and on Canada’s sleep landscape,” SCC chairman Christine Magee added. “His business acumen, entrepreneurial spirit and passion have elevated Sleep Country, Dormez-vous and Endy to new heights, and he consistently brings out the best in people at all levels. We look forward to continued growth under his leadership.”

Schaefer founded Dormez-vous in 1994 and grew the business to a household name in Quebec before joining forces with Sleep Country in 2006. Prior to Dormez-vous, Schaefer co-founded Heritage Classic Beds, a manufacturer and distributor of iron and brass beds. From 1986 to 1992, he trained and worked as a commodity broker in Chicago, later returning to Montreal to work at Dean Witter Reynolds and Refco Futures.

Schaefer studied finance and marketing at Concordia University in Montreal.

“Stewart’s dedication and drive over the past 16 years with Sleep Country have been nothing short of inspiring. He has been instrumental in achieving the dominant market share our business enjoys today,” CEO Dave Friesema said. “He is a purpose-driven leader whose tremendous talent for strategy has helped so many Canadians transform their lives through sleep, and our competitive position has never been stronger under his leadership. I look forward to working with him to drive continued growth and value for all of our stakeholders.”

In addition to its online presence and Endy, SCC currently operates 283 stores and 17 distribution centres across Canada.