Located in California, City of Hope is one of the largest medical research and treatment organizations in the United States specializing in cancer, diabetes and other life-threatening diseases. 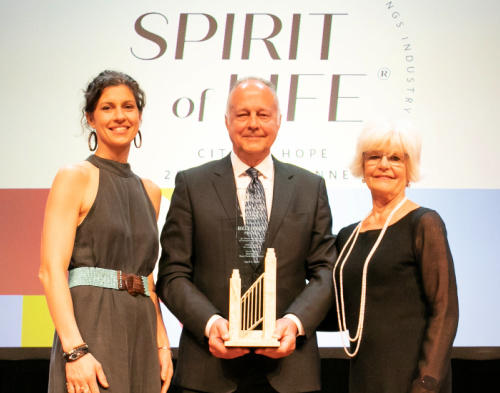 The award was presented during the IHFI’s annual Spirit of Life gala dinner, one of two fundraising events held by the group each year.

“In addition to his exceptional career with Palliser, Roger has spent an incredible amount of time working on behalf of projects related to the betterment of our industry, philanthropic activities championed by our industry, as well as humanitarian initiatives beyond our industry dedicated to improving the lives of many people,” the company said in an announcement letter sent to Palliser employees and other stakeholders.

Friesen has been active in several furniture industry-specific philanthropic endeavors over the course of his career. He served for many years a co-chairman of the City of Hope’s IHFI board as was a board member of the American Home Furnishings Hall of Fame as well as the furniture industry group of the Anti-Defamation League (ADL).

“Roger has also made important humanitarian and philanthropic contributions beyond the boundary of our industry and, in some cases, beyond North America,” the company said.

“As a newly minted university graduate, Roger was a pioneer in developing and promoting micro-finance in the rural areas of Columbia,” the statement added, continuing, “Roger has worked with a number of organizations that promote the business model as a strategy for economic development of less privileged populations around the world. This includes sitting as board chair of Ten Thousand Villages – a leader in the development and promotion of ethically made handicraft.”

More recently, Friesen has served on the board of LCC International University. Located in Lithuania, this post-Soviet liberal arts university caters to students from places such as the Ukraine and 56 other mostly challenged countries.

“Roger is currently raising resources to support students – especially the students from Ukraine – during the current crisis, as well as expand the university to create opportunity for more students,” it said, adding, “In Canada, Roger has also served as a member of the Premier’s Economic Advisory Council for the Province of Manitoba.”

“It is an honor to be recognized by such an outstanding organization as City of Hope,” Friesen said. “It’s breakthrough research and medical treatments bring hope to millions around the world facing life-threatening diseases. Hope is everything.”

Two others were also honoured at this year’s Spirit of Life gala including Nathan Cressman, president of Magnussen Home, the full-line furniture resource headquartered in New Hamburg, Ontario. The other was Andrew Koenig, president of CITY Furniture, a multi-store retailer located in Florida.