OTTAWA – The housing market continues to drive this country’s economy as housing starts climbed in January by all three measures used by Canada Mortgage & Housing Corporation (CMHC), the agency reported this week.

The trend in housing starts was 244,963 units in January 2021, up 2.6% from 238,747 units in December 2020. This trend measure is a six-month moving average of the monthly seasonally adjusted annual rates (SAAR) of housing starts.

“The national trend in housing starts increased in January,” CMHC chief economist Bob Dugan said in a statement. “Both single- and multi-family SAAR starts rebounded strongly in January from declines in December, driving the overall trend higher. Single-family starts were particularly strong in Montréal, reaching their highest level since February 2008.” 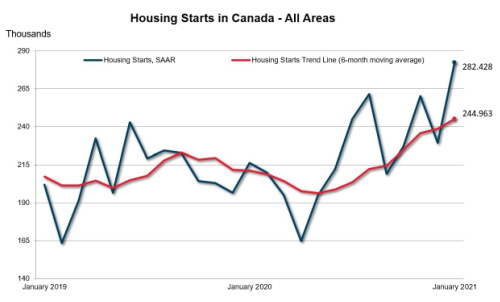 The trend measure is a six-month moving average of the monthly seasonally adjusted annual rates (SAAR) of housing starts. It’s used to complement the month SAAR, which can be misleading at times because of the multi-unit segment of the market that often varies significantly from month to month.

Rural starts were estimated at a seasonally adjusted annual rate of 15,551 units.

Actual starts of single-family homes in Canada’s urban areas – defined as cities with a population of 10,000 or more – were pegged at a preliminary 3,657 units for the month of January, a 45% leap from the 2,524 units started in January 2020.

Starts were up in each of CMHC’s five regions from coast-to-coast, ranging from 24% across the Prairies to 164% in Quebec.

Meanwhile, starts in the multi-unit segment – including townhouse, apartments and other linked dwellings for both the rental and owner markets – were set at a preliminary 13,126 units for January, a 37% surge over the same month last year.

Once again, starts were up in every region of the country, from 27% in British Columbia to 188% in Atlantic Canada.