NEW YORK – Modern furniture specialist EQ3 has unveiled its glass and steel flagship store in the heart of this City that Never Sleeps’ furniture district, proudly proclaiming it is Canadian by Design and promising to make a distinctive impression with a community made up of some of the toughest consumers in North America.

Located on the west side of Manhattan, EQ3’s new Chelsea showroom is nestled in what is described as a diverse neighbourhood boasting art galleries, restaurants, luxury apartments as well as a rich LGBTQ history. It’s also surrounded by a number of like-minded retailers such as Room & Board, West Elm and Williams Sonoma Home. 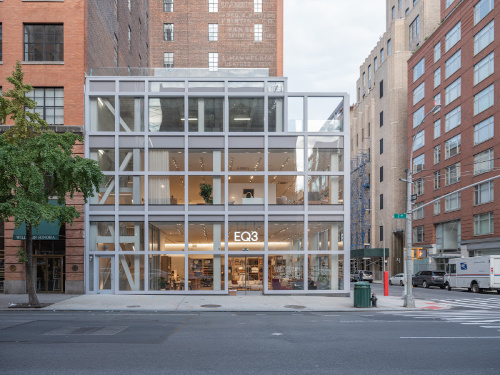 “You have to get the location right, especially in a place like New York City,” EQ3 president Mark Letain told Home Goods Online in a telephone interview. “This is one of the best locations in the city, where we’re surrounded by strong brands.”

Being surrounded by strong brands vital to the Winnipeg-based manufacturer and retailer’s thinking. “We’re in a furniture cluster,” he explained. “The customer who is shopping for modern furniture is already coming into the area.”

A division of Palliser Furniture, EQ3 has been on a growth spurt in recent months, having opened three new stores in the United States so far this year, including two in Chicago and bringing the store count south of the border to seven. An eighth will be added sometime over the next few weeks when it unveils its newest addition in the SoNo Collection, a new high-end shopping mall in Norfolk, Connecticut.

The company also has 12 stores in Canada, including a clearance centre in Laval.

The project to build EQ3 Chelsea began when they partnered with Wedge, the Montreal-based design studio best known creating marketing strategies for Drav, a Quebec-focused micro-brewer and SSENSE, a high-end clothier. Wedge created the Canadian by Design campaign “as a way to bring the silent sentiments that have always guided EQ3’s business behind the scenes into the public eye,” he said. 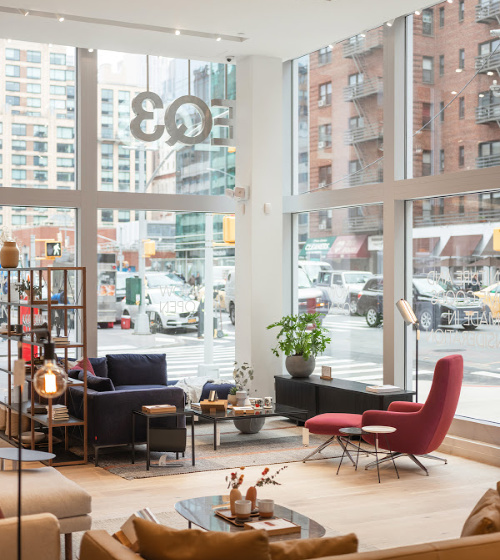 “Canadian by Design means that the values that EQ3 professes – inclusivity, intentionality, progressiveness, accessibility – are not just for show,” Letain maintains. “Instead, they’re baked into every aspect of their business, from product design, to partnerships, to store expansion, to everyday operations.”

The store itself – which covers three stories totalling approximately 11,000 square feet – was designed in-house from the ground up by EQ3’s former creative director Thom Fougère as a “light filled jewel box” that would capture the attention of passersby walking through the neighbourhood.

“People walking by can see exactly what we have to offer – it’s three stories high, constructed in glass and steel and very open,” Letain enthused, adding immediately after walking through the doors “you’re going to see an environment that’s not cluttered, that’s clean and with room settings that show-off the design of the furniture.

While the design of physical structure and its interior layout are powerful images, it what happens after the customer enters the space that brings the message home.

“We’re a competitor that’s doing things differently,” Letain said “We design and manufacture everything we sell – and it’s made in Winnipeg.”

About 90% of EQ3’s product assortment is on display within the store, as well as several other lines including Casper, Marimekko and Vitra, but not Herman Miller, which is carries only in Canada.

“Where we’ve put our focus is on the customer experience,” Letain said, noting EQ3 has a specific definition of what retail’s current key to success really means. “The customer experience is measured by the quality of the interaction the customer has when she visits the web site, when she walks into the store and when we deliver her purchase to her home – and once the sale is complete, its then about how we address whatever concerns she may have.” 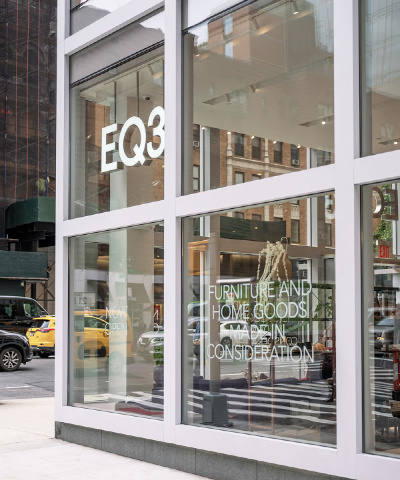 This means is also taking the term ‘vertically integrated’ to a level not widely seen in the furniture. The intent is to control everything from product design to manufacturing and then on to distribution, retail and even home delivery. Its also why EQ3’s customer service department is located right next to factory in Winnipeg.  Letain believes those who designed and made the product are in the best position to address the consumer’s concerns after its been delivered.

Getting the experience right also means having complete control of the supply chain – EQ3 always wants to have 95% of its best sellers in-stock. “These are the differences that help set us apart,” he said. “That what it takes to be a successful mid-market brand.”

And mid-market is where EQ3 wants to be. When first launched back in 2001, its was described as ‘IKEA-lite’ but that’s not where it is almost two decades. “We are positioned in the mid-market,” Letain explains, noting that places EQ3 between IKEA at the low end and Restoration Hardware at the high. “We steadily moved upmarket as our design improved. We are now offering really great value.”

The drive to be vertically integrated also explains why EQ3 is focusing only owning its own stores. “We made the decision after the recession to adopt the corporate store model and to walk away from the franchise model,” he said.

EQ3 still has strong relationships with other retailers in both Canada and the U.S., mostly notably with The Bay and AllModern – a division of e-commerce giant Wayfair as well as a several independent merchants. It also has a growing e-commerce business, which Letain anticipates will account for 15% to 20% of EQ3’s business in the not-too-distant future. “It’s going to be a growth engine for us,” he says.

Once the Connecticut store opens – probably in the opening weeks of January – Letain doesn’t plan to open the next EQ3 until sometime in 2021. “We need to stabilise our supply chain which has gone as far as it can go and we need to get all of the pieces in place before we take the next step,” he said.