OTTAWA – Existing home sales via its Multiple Listing Service (MLS) will continue to fall both this and next, the Canadian Real Estate Association (CREA) says its updated forecast, citing rising interest rates as the primary cause.

“With interest rates on the rise, home sales have continued to cool. In some parts of the country, home prices have fallen from their peaks reached earlier this year, are flat in some regions, and are still climbing in others. The issue of not enough homes for sale has not gone away,” the realtors’ group said last week.

CREA believes some 532,545 properties will trade hands via its MLS system in 2022, a decline of 20% from the 2021 annual record. This is fewer than forecast in CREA’s previous June forecast and is mostly the result of a downward revision to sales activity in Ontario, along with smaller revisions in British Columbia, Alberta and Quebec. 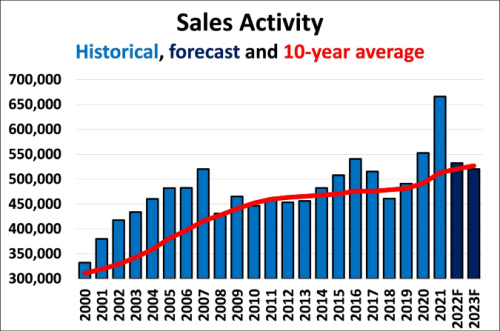 However, the national average home price is forecast to rise by 4.7% on an annual basis to $720,255 in 2022. That said, much of that increase reflects how high prices were to start the year. Annual price gains are forecast to be largest in Quebec and the Maritimes.