OTTAWA – The resale housing market in 2016 is expected to look very much like the market in 2015, particularly in the Lower Mainland region of British Columbia and the Greater Toronto Area, according to the latest forecast from the Canadian Real Estate Association (CREA).

“However, many of the defining themes among Canadian housing markets last year have persisted, and in some cases intensified, in early 2016,” it said, adding, “Interest rate are now also widely expected to remain low for longer, with administered lending rates beginning to rise no earlier than the second half of 2017.”

This means the trends this year will resemble those apparent in 2015, with very tight supply leading to strong price gains in British Columbia and Ontario – particularly in the Lower Mainland and in and around the Greater Toronto Area.

“Price gains in these regions are expected to continue to stand in sharp contrast to moderate price declines among housing markets whose prospects are closely tied to oil and other natural resource prices,” CREA’s statement said.

The group now believes that with stronger economic growth expected in the second half of 2016, they don’t expect to see the housing market rebalance until next year.

Nationally, sales activity is forecast to rise by 1% to 511,400 units in 2016 and will continue to reflect the significant regional differences in housing market trends.

By contrast, sales activity in 2016 is forecast to ease in Saskatchewan as well as Newfoundland & Labrador – two of Canada’s major oil producing provinces – by 3.7% and 4.5% respectively.

With prices continuing to push higher in B.C. and Ontario and sales in these expensive real estate markets hitting record highs, CREA’s forecast for national average price has been revised upward to $478,100 in 2016 – an annual increase of 8%. 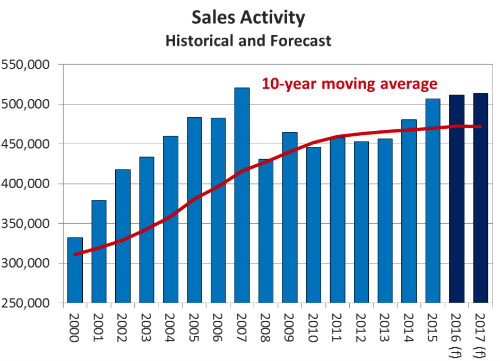 In 2017, national sales are forecast to number 513,400 units, little changed (+0.4%) from forecast levels for 2016, as activity in B.C. and Ontario comes off the boil due to deteriorating affordability while confidence begins to recover in provinces hardest hit by weak prices for oil and other natural resources.

Consumer confidence is anticipated to strengthen and begin drawing homebuyers off the sidelines in Alberta, Saskatchewan and Newfoundland & Labrador as their economic prospects improve. This is anticipated to contribute to a modest rebound in sales activity in these provinces in 2017.

British Columbia is the only province forecast to post an annual decline in home sales in 2017, reflecting a combination of a growing shortage of single family homes available for sale and deteriorating affordability. Even so, activity is expected to continue trending near record levels. Ontario is forecast to see sales level off in 2017.

Sales activity is forecast to continue to push higher in Manitoba, Quebec, and Nova Scotia in 2017, reflecting the prevailing forecast for improving economic prospects in these provinces. Sales in P.E.I. are also forecast to improve as the province continues to benefit from a lower Canadian dollar.

The national average price is forecast to edge higher by 1.1% to $482,500 in 2017, with modest price gains near or below inflation among provinces.

Slower national average price growth in 2017 reflects weaker price gains in B.C. and Ontario. Price trends in these provinces reflect an anticipated slowdown in luxury sales activity, a continuing supply shortage of relatively more affordable low rise family homes and an anticipated increase in relatively more affordable condo unit sales as a proportion of total sales activity. In other provinces, an ample supply of listings relative to demand will continue to keep price gains in check.