Home / Article: CNW to be a ‘marketing and technology’ group

CNW to be a ‘marketing and technology’ group

MONTREAL – The marriage of retail and technology may still be in its early years, but its proving itself to be a strong and independents need to find a suitable partner if they want to thrive in the current environment. That was the message brought to members of Cantrex Nationwide Group (CNW) at their national convention held at Place Bonaventure recently.

It was the first national meeting of Canadian members held by the group in recent years, which has also led a strong contingent to the spring PrimeTime event held by its parent company – Nationwide Marketing Group – for the past few years.

The 2½-day event was attended by some 750 industry professions, including members, vendors, CNW staff and guests. It also featured a mini-trade show with some 100 vendor companies from both Canada and the U.S. as well as from across the group’s major product categories including furniture, mattresses, major appliances, floor covering, photography, consumer electronics and home décor. 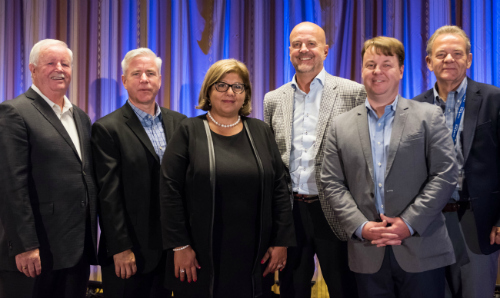 In addition to the buying fair, CNW members were also offered a full slate of store management, finance, sales and marketing seminars as well as a key presentation from author and futurist Doug Stevens who presented his thoughts on The Future of Retail.

In a mid-event interview with Home Goods Online, CNW chief operating officer Jeannine Ghaleb pointed out that just as the nature of retail is changing, the buying group itself is evolving to meet the changing needs of the independent retailer.

“Retail is changing and it’s being driven by technology,” she said. “And this technology is the tool the consumer is using to drive her journey down the path to purchase.”

For an organisation such as the one she leads, the challenge becomes two-fold. First, Ghaleb notes they have to understand and master the intricacies of this technology and then first ways for the independent to adopt it in a meaningful way and at an affordable price.

“Many retailers are not grasping the challenges and are choosing to close their doors,” she laments. “They don’t want to risk the capital they have on a business they don’t understand.”

But she also believes the rewards are there for those who do. But it also means Cantrex has to change as well.

Although the details of how CNW plans to help independent retailers achieve this weren’t revealed, Ghaleb did stress it’s a process each individual member isn’t going to have to commit to if the desire is to be successful in the emerging retail environment.

CNW will also work more closely with vendors to ensure the process from order to delivery is a smooth one.

“Everything is changing exponentially,” she said. “We have a big responsibility to the independent retailer – to help them in their search for what works to bring the consumer into the store. That’s our passion and our focus.”

Ghaleb said CNW’s senior management team will survey both members and vendors about their experiences at the convention before deciding whether one will be held next year. She expects an announcement about this will be made in the next few months. In the meantime, the CNW team is readying themselves for the next PrimeTime, which will be held from March 19 to 22, 2017 at the New Orleans Convention Center in New Orleans, Louisiana.