OTTAWA – While actual housing starts climbed nationally in March, they fell on a seasonally adjusted basis, according to the latest report from the Canada Mortgage & Housing Corporation. The trend in housing starts, that is the six-month moving average of the monthly seasonally adjusted annual rate (SAAR), fell to 204,717 units in March from 209,109 united in February 2020.

These figures measured housing construction just as both federal and provincial governments began shitting down various parts of the economy in response to the ongoing COVID-19 pandemic.

“The national trend in housing starts declined in March, likely indicating that the COVID-19 pandemic has begun to impact residential construction activity,” CMJC chief economist Bob Dugan said in a statement. “Activity in Toronto and Montréal trended lower, reflecting broader declines in their respective provinces. While Vancouver registered an up-tick, it was not sufficient to offset an overall decline in British Columbia. Activity trended lower in the Atlantic region, but conditions were mixed in the Prairies, as lower activity in Saskatchewan was offset by higher activity in Alberta and Manitoba.”

CMHC noted that like other government organisations and businesses, it is closely following developments around COVID-19. It is stress-testing pandemic scenarios to assess impacts as events unfold and will continue to issue its housing starts data each month as planned. 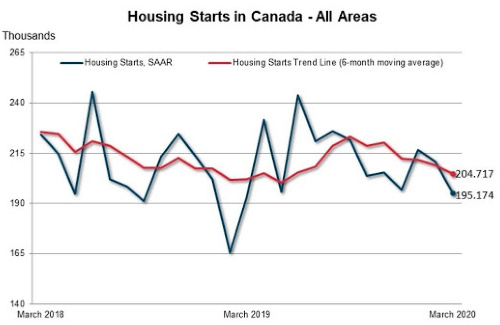 The federal housing agency uses the trend measure as a complement to the monthly SAAR of housing starts to account for the swings in the monthly estimates. These are usually driven by the multi-unit segment of the market which can vary significantly from one month to the next.

Rural starts were estimated at a seasonally adjusted annual rate of 12,621 units.

However, actual starts of single-family homes in urban areas – which CMHC defines as any municipality with a population greater than 10,000 – climbed 33% in March to a preliminary 3,374 units, compared to 2,543 units in March 2019.

For the first three months of 2020, single family starts totalled 8,735 units – up 26% from the 6,923 units started during the comparable period last year. The uptick was felt in every region of the country, save British Columbia, where they fell 6% on a year-over-year.

Meanwhile, multi-unit segment starts were set at a preliminary and actual 9,456 units for March, a drop of 8% from the 10,310 units recorded for March 2019. The decline was felt in every region of the country.

For the year-to-date, the multi-unit segment recorded 29,435 units, a modest 3% uptick over the 28,649 units started in the first quarter of last year. Once again, the uptick occurred in every region of the country except B.C., where they fell 6%.

In her research note, Rishi Sondhi of TD Economics described CHMC’s report for March as “the calm before the storm.

“Housing starts held up relatively well in March,” she continued, adding, “However, the broad-based decline across provinces suggests that the COVID-19 pandemic is beginning to impact activity. The situation will only get worse in April. Indeed, in late March, the Quebec government deemed most construction activity ‘non-essential’.”

She also pointed out the Ontario government took similar action, although it is allowing projects in progress to be completed. She also noted Statistics Canada’s most recent flash estimate of building permits showed sharp declines across much of the country.

“Homebuilding is poised to suffer a notable setback in the near-term as the pandemic weighs on construction,” Sondhi said. “However, consistent with the broader economy, we anticipate stronger homebuilding activity in the second half of the year.”