MONTREAL – Bouclair has opened a new store in this city’s trendy Griffintown neighbourhood as part of a rebuilding drive that was launched in late 2019 when a new investment group took the home décor and furnishings specialist out of bankruptcy.

In recognition of its Quebec roots, the store will feature a first initiative of its kind for Bouclair called Galerie B, which will spotlight up-and-coming local artists working in a variety of genres. 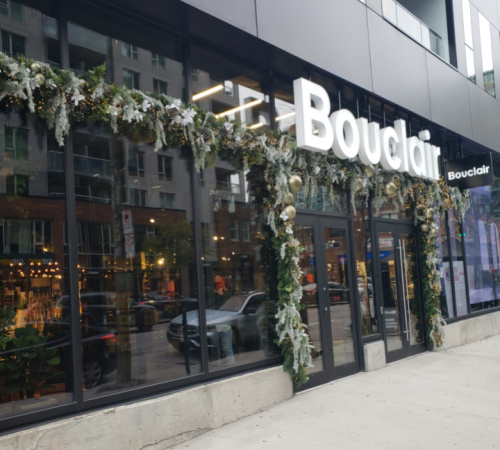 “Bouclair is a proud Quebec company which values creativity and design in all forms. It is important for us to continue to innovate and, above all, inspire our customers, employees and community. The idea for Bouclair Griffintown and Galerie B came from a desire to give emerging Montréal and Quebec artists a place to express themselves and have their talents be discovered,” Bouclair’s owner and chief executive officer Peter Goldberg explained in a statement.

Galerie B: encouraging emerging artists
Art is a big part of daily life in the Griffintown neighbourhood and Galerie B will serve a platform where a local artist will be featured each month. Work created by fine art students studying at the nearby Concordia University will be the first to be featured through the end of January 2022.

Interactive art will also be showcased on Montréal’s largest exterior screen, inspired by Times Square in New York City. Consumers walking by the store will be able to see original interactive content created by Rodeo FX, a Montreal-based visual effects company known internationally for its work on TV series like Game of Thrones and Stranger Things. Passersby will be able to interact with the content and actively participate in the work.

Goldberg told Retail Insider the layout of the store otherwise includes ‘grab-and-go’ impulse items at the checkout in addition to its traditional assortment of home décor items – ranging from artwork to linens – as well as accent and occasional furniture.

Elements of the new Griffintown store, which is also the first Bouclair store in a city centre, will appear in all new builds and renovations planned to the chain, which currently has a store count of 55, 33 in Quebec. Some 30 people were added to the company’s payroll at this store, which is nestled among a number of other furniture retailers such as EQ3, West Elm and Must Société.

Bouclairs only other Montreal store is located at the Central Market, near the Rockland Centre.