MONTREAL – BMTC Group, parent company to Quebec’s largest network of furniture, mattress and appliance stores, said overall economic conditions in the province contributed to a decline in both sales and revenue for the fiscal year that ended this past January.

For the three months ending 31 January 2020, revenues totalled $171.5 million, a 2% decrease from the $174.6 million rung-up for the corresponding period of the last fiscal year.

BMTC shifted its fiscal year end from 31 December to 31 January beginning in 2018. 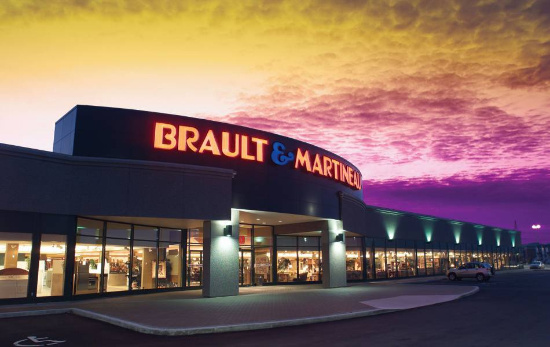 While the company doesn’t report e-commerce sales, most outside observers estimate them at about 5% of revenue. This would put its online business in the $36 million range for the year. BMTC launched a $10.6 million overhaul of its IT systems in 2016 to bolster its ability to compete in the e-commerce space.

BMTC noted its ongoing share repurchase program contributed two cents per share to net earnings for the 2020 fiscal year while the sale of its Brault & Martineau stores in the Montreal suburbs of Repentigny and Kirkland resulted in a combined after-tax gain of $4.6 million or 16 cents per share.

In a note to shareholders, BMTC president and chief executive officer Marie-Berthe Des Groseillers announced the publicly-held retailer will open a new 80,000 square foot Brault & Martineau store in Kirkland to replace its existing store there. It will also build and open a new 50,0000 square foot EconoMax store on the same property to replace the banner's store in Côte-Vertu. Both are expected to open later this year.

After closing as part of the Quebec government’s response to the global pandemic, Des Groseillers said all 32 of the company’s stores had re-opened by early June. She also noted while e-commerce sales grew dramatically during the shut down, the company suffered an overall revenue decline which will be reflected in first quarter 2021 results.

“In-store sales in the Greater Montreal Area increased by 83% in the days following their reopening,” she said, reporting most Brault & Martineau and EconoMax stores opened on 25 May. However, she added in-store sales have slowed in recent weeks. “During the month of May 2020, the company’s online sales continued to grow despite the gradual reopening of its stores.”

Des Groseillers told shareholders that costs associated with the COVID-19, including the new measures implemented in its stores and distribution centers to meet the requirements of the post-pandemic period as well has the costs associated with the closing and re-openings of its stores will have a significant impact on the company’s results for the first and second quarters of its current fiscal year.

The company also noted it has cash and investments valued at $124 million at the end of its fiscal year ending this past 31 January. It also owns almost all of the real estate its stores and distribution centres occupy “which reduces pressure on cash flow requirements.

“Management is confident that the company’s operational efficiency during this crisis, its market leadership and solid financial position will allow us to emerge a stronger organization even in these difficult market conditions,” Des Groseillers said.

At the end of January, BMTC Group operated 32 stores under three different banners including Brault & Martineau and EconoMax in the Greater Montreal Area and Ameublements Tanguay, with eight locations in and around Quebec City.