OTTAWA – Before Black Friday, there was Boxing Week, which despite the former’s increasing popularity in recent years remains critically important to almost every furniture, mattress and appliance (FMA) retailer across this country. But in 2020, those seven profit-producing days were challenged by the demands of unprecedented public health measures.

Provincial government-imposed lockdowns shuttered most Canadian brick-and-mortar FMA stores for the first time in memory. In Ontario, for example, many of these stores have not re-opened since closing on Christmas Eve. Originally, the target date for re-opening was January 23, but the lockdown is expected to be extended until February 19.

As part of its stay-at-home order, Quebec has also established an 8pm curfew, cutting off the last hour or two of the typical retail day. Meanwhile, stores in Alberta are open but in-store traffic is limited to 15% of capacity.

Home Goods Online reached out to several retailers across the country to get a sense of how they’re coping under these conditions. From these discussions, several observations came immediately to mind. While most agreed sales throughout the fourth quarter were generally very good – often considerably high on a year-over-year basis – those with active e-commerce platforms were outperforming those not sporting a shopping cart on their web site. Indeed, those that don’t are quickly getting on the e-commerce bandwagon. 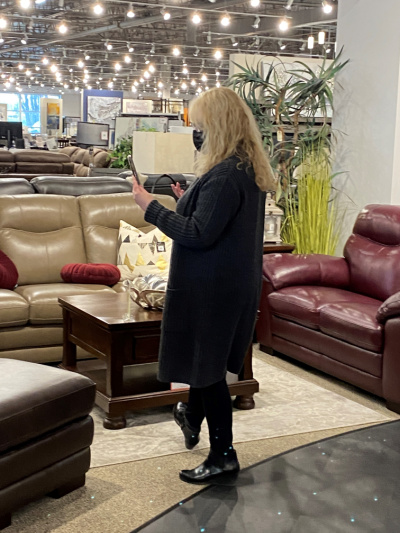 Sales performance during Boxing Week itself was also determined, at least in part, by where in the country the store is located. A good example is Scott Reid, owner and general manager of Reid’s Furniture in Thunder Bay, Ontario who told HGO his store’s Boxing Week sales “were down 69% this year versus last.”

Contrast this with John Allan MacKay, general manager of Nordic Holdings, the operators of Konto Furniture and Sofa Land in Alberta. “We are very happy with our Boxing Week this year and had a substantial increase over Boxing Week in 2019.”

Randall McKay, owner of Daley’s BrandSource Home Furnishings, reported his store – located in Fredericton, New Brunswick – was open during Boxing Week and sales were up about 3.5% over the same period a year earlier.

Andrew Tepperman, president of Tepperman’s, the six-unit regional powerhouse based in Windsor, Ontario, is a good example of new dynamic facing FMA retailers in this country. While written sales for the week were lower because of the closures, every member of his team was hard at work managing telephone calls and participating in web chats with customers.

“Delivered sales were still strong as we were able to do in-home deliveries and customer pick-ups,” he told HGO. “We still had hundreds of customers come to the stores not realizing they were closed so we positioned a concierge at every entrance to communicate and provide a hand-out how they can purchase by calling or online.”

The 95-year-old retailer upgraded much of its technology in the early days of the pandemic this past spring. “We were also able to successfully create a virtual sales experience where a customer can make an appointment to work with a salesperson using video,” Tepperman said, adding, “It’s amusing to walk around the store and watch salespeople sell a sectional on a video call. It works!”

Boxing Week also occupies a prime spot on most FMA retailers’ promotion calendar. Often, the week is used for ‘high impact’ promotions. While there was still a lot of that – with electronics, appliances, end-of-line and discontinued furniture items taking centre stage – many took a slightly different approach.

“We abandoned our planned Boxing Week ‘high impact’ and went with more soft-sell ‘we are manning the phones and we have lots of inventory’ approach,” Scott Reid said, adding that considering the operating environment, it worked quite well.

“Our Boxing Week promotion focused on electronics – which are always a strong category – capitalizing on the last week of the Energy Star rebate program for appliances, discounting of core SKUS rather than special buys and up to 80% off our discontinued items,” Andrew Tepperman said, noting that ‘as-is’ and ‘scratch-and-dent’ items are more challenging to sell and manage online.

John Allen McKay said Nordic Holdings emphasised ‘buy local’ in their flyers for both Konto and Sofa Land. “We also increased spending on our social media, Google and YouTube campaigns,” he reported, “We also had campaigns running on radio and television.”

Week caps strong fourth quarter
Boxing Week capped off a year unlike any other. It marked the beginning of 2020’s second lockdown ordered by provincial governments to combat the spread of the COVID-19 pandemic. Most FMA retailers reported sales in the third of fourth quarter were quite strong as consumers – unable to spend on travel, entertainment and hospitality – chose instead to invest in making their homes more comfortable.

For example, Scott Reid enthusiastically noted his sales for the fourth quarter alone were up 47% over the prior year.

“Our sales in the fourth quarter were up 36% over last year,” Randall McKay of Daley’s BrandSource said.

“Written sales were high – about 20% over the same time the year before and delivered sales about 10% over previous year,” said Eric Bennett, owner and president of the three-unit Bennett’s Furniture & Mattresses, based in Peterborough, Ontario.

“For the calendar Q4 they were up considerably,” Andrew Tepperman said. “Since June, like most of the home furnishings stores in North America, demand has been outstripping supply. In our 95 years, it’s one of the only times where a crisis helped to increase revenues. We invested a lot in safety for staff and customers which instilled confidence when they were in-store.”

“We are very blessed to be in the furniture industry right now,” Nordic’s John Allan McKay said. “I know a lot of other industries are struggling and we don’t wish that upon any business, but it would seem that furniture is booming during the pandemic. With the restrictions on travel and eating out, I think a lot of people have more disposable income. I also think they are spending more time in their homes, so they want to make them as comfortable as possible. We had a substantial increase over the fourth quarter in 2019.”

The biggest challenge right now
While business was brisk throughout the second half of 2020, the pandemic also presented a new and different set of challenges. Almost every FMA retailer HGO spoke with noted the rise of COVID-19 negatively impacted their ability to replenish their floors. And for others, even with e-commerce, have the brick-and-mortar store closed has proven a drag on operations.

“Not having the door open is the obvious one,” was Scott Reid’s immediate reply. “We’re also anxiously awaiting the ‘avalanche’ of furniture to arrive so that we can finally satisfy our so-far patient customers.”

“The supply chain is a big challenge,” John Allen McKay said. “We have seen major delays from both our domestic and overseas vendors. This is a problem we are all having and we have to adjust in order to deal with it. We are investing in more inventory than we normally would so that we don’t end up with a giant shortage in months to come.”

Looking ahead into 2021
FMA retailers are coming off a much better than expected 2020 and are somewhat ambivalent about 2021 as it will depend on the strength of the post-pandemic economic recovery. And, for many in Ontario and Quebec, on when they can re-open the doors.

For the new year’s first quarter, most aren’t overwhelmingly optimistic. “It’s going to be terrible for written sales,” Tepperman said. “But it should be strong for delivered sales, as long as we can go into the home. We’re always looking at the best, worst and most likely scenarios. Realistically, we have prepared ourselves to be closed through February 28. Re-opening on March 1 will coordinate nicely with the kick-off to our 96th anniversary and end our year-end. I believe all retailers in our space experienced a considerable uplift in sales after the re-opening last time.”

“The first quarter could be very weak, especially if the closing is extended,” Bennett said. “If it’s not extended and we are open I think business will be strong. Right now, we are getting a lot of travel and entertainment dollars being spent on furniture, mattresses and appliances.”

“If nothing else, we are always an optimistic group,” Nordic’s McKay said. “With one week in we seem to be on a good pace but typically we see a slow down around the middle of January through February. This year we are seeing fairly abnormal patterns, so you can’t really forecast anything based on previous years. We will certainly push to keep the momentum going and believe we have positioned ourselves to have a very successful first quarter.”