Home / Article: Article ranks No. 1 on the Growth 500 for second straight year

Article ranks No. 1 on the Growth 500 for second straight year

VANCOUVER – Article, the direct-to-consumer furniture e-tailer based here, was ranked No. 1 on the annual Growth 500, the definitive ranking of Canada’s Fastest-Growing Companies, for a second consecutive year.

In a statement, the company said the back-to-back No. 1 placements demonstrate its ability to continue winning new customers with their innovative approach to merchandising and selling furniture. The online furniture and home decor brand topped the annual ranking with five-year revenue growth of 24,182%. The Growth 500 is published by Canadian Business.

“Being named Canada’s Fastest-Growing Company for a second year in a row validates the team’s efforts to make it easy for customers to create beautiful spaces,” chief executive officer Aamir Baig said. “Our tremendous growth has been fuelled by customer obsession. We seek direct customer input to create a remarkable end-to-end furniture experience, and this approach has led to projects that have made an immediate, positive impact on customers.” 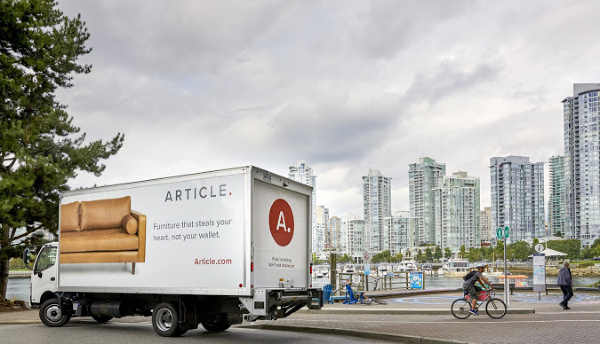 What’s more, Article was also ranked at No. 11 on the new Top 400 list of Canada’s top growing companies published by the Globe & Mail’s Report on Business. Its three-year revenue growth was pegged at 3,004%.

In an interview with Retail Insider, Baig admitted the past few years have been hectic for the privately held company which was founded by four engineers in 2011, who launched the web site two years later.

“Business has grown a whole lot wilder than I would have ever dreamed,” he said. “We’ve had north of 50,000% growth until the year ending 2017 and the 24,000% growth in the year ending 2018. So, growth has been brilliant. Been great. It’s really a validation of the underlying proposition and the focus that we brought in delivering an end-to-end customer experience that’s a lot more convenient, a lot more valuable to the end customer. That’s given us a lot of confidence to continue going forward.

“The industry is massive,” he continued, adding, “So I think we’re just the tip of the iceberg here of what the opportunity is. So far we’re certainly proud of the growth we’ve been able to achieve.”

To help facilitate the next phase of growth, Article announced the expansion of its in-house delivery program – called the Article Delivery Team – into its home city of Vancouver, the first in Canada. Drawing on the results from teams in New York and Los Angeles established in earlier this year, Baig said the program uses customer feedback to rapidly iterate the final-mile experience. Unlike third-party partners, Article’s own delivery team can solve common customer inquiries on the spot like rescheduling delivery appointments or shipping alternate product sizes or colours.

In the Vancouver pilot, delivery times were reduced by 2.5 days when compared to outsourced delivery partners and the incidence of negative feedback decreased almost four-fold.

In addition, Article has named two new members to its senior executive team as part of the effort to drive its growth.

Caroline Schein joined Article this past spring as its first vice president of human resources. With previous roles at Boston Pizza, Best Buy Canada and Vancity, she will be responsible for building Article’s people and culture practices across North America.

Joining Article from Finning International is Cristian Chavez, who was named as their first senior vice president of supply chain.  He is responsible for developing key supply chain strategies that will directly support the company’s ability to deliver unbeatable value on high-quality furniture and home décor.

“To make it easy for our customers to create beautiful modern spaces, we need the right talent and strong supply chain,” said Baig. “We'll continue to use customer feedback to determine what we improve on next.”

The company, which employs more than 350 staff across North America, has been profitable since 2015. Since launching in 2013, the company has delivered in excess of 350,000 orders to customers across the U.S. and Canada. Revenue for 2017 was estimated at US$100 million. About 85% of its sales are to consumers in the U.S.