OTTAWA – Actual housing starts across the country continued to climb in April on a year-over-year basis in every province across the country except Nova Scotia where restrictions brought in to combat the COVID-19 pandemic brought construction to a halt, according to the latest data from the Canada Mortgage & Housing Corporation (CMHC).

The federal housing agency also noted their trend measure reveal April’s start were slightly higher than those recorded in March at 279,055 units versus 272,164 units. The trend is a six-month moving average of the month seasonally adjusted annual rates (SAAR) of housing starts. 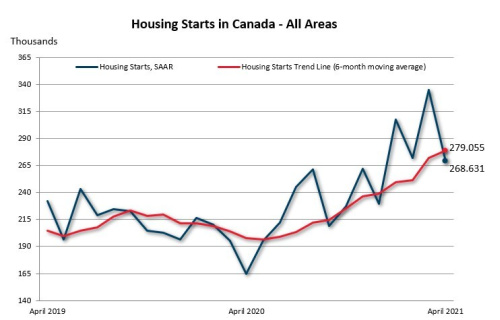 “The national trend in housing starts remained elevated in April, despite a decline in the level of monthly SAAR starts from the record high set in March,” CMHC chief economist Bob Dugan said in a statement, the decline was most keenly felt in regions where strong growth had been recorded in the prior month, including Toronto and Vancouver.  “Single-detached SAAR starts held steady following a modest increase in March. Nonetheless, the overall trend-level of activity remains elevated as a result of strong activity so far this year.”

In its report, CMHC noted starts of single-family homes totaled a preliminary 6,108 units in April, 123% higher than the 2,736 units in April 2020. Upticks were recorded across the country ranging from 29% in British Columbia to 115% in Ontario.

For the year-to-date, single-family home starts were set at 18,697 units, a rocket-fueled 63% increase from the 11,471 units for the first four months of 2020. Once again, the gains were recorded in every region from coast-to-coast and most keenly in Quebec which led the country with a gain of 213%.

Meanwhile, the multi-unit segment – which includes apartments, townhouse and other linked dwellings – saw starts set at a preliminary 14,527 units, up 47% from April 2020’s 9,908 units. Every region report gains except Ontario where they fell 14% for the month.

“Like clockwork, April was yet another in a series of strong months for starts,” Rishiu Sondhi of TD Economics said in her research note. “The backdrop for homebuilding remains favourable (soaring lumber prices and slow population growth notwithstanding), as housing demand is strong and prices are high.”

She also pointed out interest rates remain low as do unsold inventories of new homes. With building permits sitting at multi-year highs, near-terms gains in building activity are almost certain.

“Moving past the near-term, we anticipate some moderation in starts as demand comes off the boil and interest rates rise,” she cautioned, noting purpose-built rental construction remains an important driver of homebuilding, accounting for one-thirds of starts in the first quarter of the year.