Home / Article: All in the family: 60 years of evolution and growth

All in the family: 60 years of evolution and growth

While it’s certainly not uncommon for family-run furniture operations to stand the test of time, it’s rare to hear of one that changes hands – although not necessarily in influence and vision – only to end up back in the hands of its original owners. Stylus, Made-to-Order Sofas is one such company, and that steady stewardship has proven a significant contributor to its growth and prosperity. 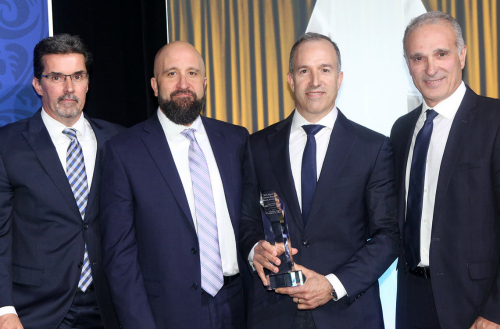 Their families founded the company over a half-century ago (in 1959, to be precise) and after buying it back from TerraVest – the Calgary-based investment firm – in 2010 for $6.5 million, the three are doing all they can to grow the upholstery operation which thrives because of what Rick Ripoli describes as its customer-oriented business model. And they’re being recognised for their hard work, too.

The company and its leadership team are the 2018 recipient of the Lifetime Achievement Award, which is given each year by the Canadian Home Furnishings Alliance (CHFA) – the furniture industry association based in Mississauga, Ontario – “to recognise those individuals who over their career have made exemplary and sustained contributions to the Canadian home furnishings industry and their communities.”

At a gala celebration to be held just prior to the opening of the 2018 edition of the Canadian Furniture Show (CFS), Stylus and its leadership team will join an illustrious group that includes, but isn’t limited to: Art DeFehr, chairman of Palliser Furniture; the late Orville Mead, president of Durham Furniture; the late Bruce McPherson Sr. of the Gibbard Furniture Shops; Pat Thody, formerly CEO of Simmons Canada; Jean Deveault of Canadel and Richard Magnussen of Magnussen Home, among others.

In an interview with Home Goods Online, Rick Ripoli said he was told of the award several weeks ago. He and his partners are more than pleased about it. “We’re pretty stoked about it, actually. We’ve been honoured several times for products, but never for the company.”

“We started in 1959,” he explained. “The company was founded by Sam Vernon and my father, Philip, who worked for Sam. In 1977, he purchased the company with his brother-in-law Nino Barichello and Nino’s brother Eugene.

“I joined in October 1977 and we all became equal partners,” he continued. “We had a small shop with 14 or 15 people and we started to grow. We were selling primarily in lower-mainland of Vancouver, but I got more involved in sales and started to reach out to department stores.”

At the time, the company was known as Atlantic Furniture and under Rick’s leadership made its first forays outside of British Columbia, selling to retailers in Alberta, Saskatchewan and Manitoba.

“In 1987, my brother Dennis joined the firm and we started to grow by branching out and taking our products into Ontario and attending more trade shows,” Rick Ripoli recalled. “We’ve moved a few times with our 14-man shop and we started importing products from Europe to supplement our sales, in particular leather furniture – especially in the 80s.”