OTTAWA – By all three of its measures housing starts were up in November over October, according to the latest figures from Canada Mortgage & Housing Corporation (CMHC) but actual starts on a year-over-year basis continued to decline, a sure-fire indicator the overall housing market is cooling.

The federal housing agency said its trend measure places housing starts in November 2018 at an annualised 210,038 units, a 1.7% gain over the 206,460 units for October. The trend measure is a six-month moving average of the monthly seasonally adjusted annual rates (SAAR) of housing starts.

“The national trend in housing starts increased in November, following four consecutive months of decline,” CMHC chief economist Bob Dugan said in a statement. “While single-detached starts continued to trend lower in November, this was more than offset by a gain in the trend of multi-unit starts following several months of weakness.” 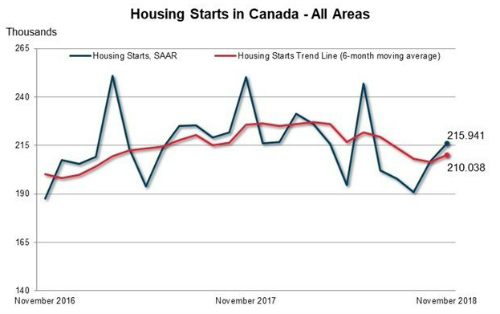 CMHC uses the trend measure as a complement to the monthly SAAR to account for considerable swings in the estimates and obtain a more complete picture of Canada’s housing market. In some situations, analyzing only SAAR data can be misleading, as they are largely driven by the multi-unit segment of the market which can vary significantly from one month to the next.

Rural starts were estimated at a seasonally adjusted annual rate of 13,887 units.

On an actual basis, CMHC set national starts of urban single-family homes at a preliminary 4,613 units for November. While that was 500 more units than in October, it was down 13% from the 5,401 units started in October 2017. They were down in every region of the country, except Atlantic Canada where they were up 33%.

CMHC defines an urban area as a town with a population of more than 10,000.

For the year-to-date, single family starts totalled 50,089 units, down 14% from the 58,409 units for the corresponding period of 2017. Once again, they were down everywhere across the country except Atlantic Canada, where they were up 7%.

Meanwhile, multi-unit segment starts – whether for the condominium or rental market – were off 11% in November at a preliminary 13,442 units. Starts were flat in Quebec and Atlantic Canada but down everywhere else across the country.

Because of strong growth in the first half, multi-unit starts for the year-to-date are up 2% at 129,221 units. Starts were up in Ontario, Quebec and Atlantic Canada but down across the Prairies and British Columbia.

For the month of November, total housing starts were a preliminary 18,055 units. While up from October, they were down 12% over November last year.

In his research note, Fotios Raptis of TD Economics appeared upbeat about the overall housing picture, pointing out November’s trend measure gave the first uptick since June and the economy in general remains broadly supportive of the market.

“On a trend basis, housing starts appear to have troughed with some upward momentum of late,” he wrote. “Given the upward trend in building permits through October, there's a good chance that housing starts will continue to see some further upside in the months ahead for both single and multi-family units.”

Despite affordability issues in both the Greater Toronto and Greater Vancouver areas, rising interest rates and troubles in the oil patch, Raptis believes a steep downturn in housing starts is unlikely, saying, “Canada’s population is on the rise, medium-term income growth should remain healthy and most markets are generally not overbuilt.”