OTTAWA – While housing starts climbed slightly on an actual basis in October, they fell on a seasonally adjusted basis and according to its own trend measure, the Canada Mortgage & Housing Corporation (CMHC) reported last week.

The federal housing authority said the trend in housing starts was 264,264 units in October, down 2.3% from 270,661 units in September. This trend measure is a six-month moving average of the monthly seasonally adjusted annual rates (SAAR) of housing starts.

“The six-month trend in housing starts declined from September to October, as the retreat in total starts from their earlier 2021 levels continued,” CMHC chief economist Bob Dugan said in a statement. “For SAAR housing starts in Canada’s urban areas, a slight increase in single-detached starts didn’t offset a larger decrease in multi-family starts in October and led to a decline in overall starts for the month.

“On a trend and monthly SAAR basis, however, the level of housing starts activity in Canada remains high in historical terms,” he continued, adding, “Among Vancouver, Toronto and Montreal, Vancouver was the only market to register growth in total SAAR starts in October, due to a rebound from the prior month in the multi-family segment.” 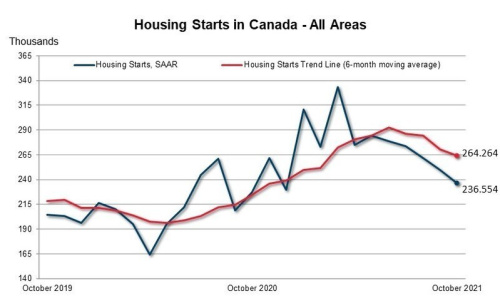 CMHC uses the trend measure as a complement to the monthly SAAR of housing starts to account for considerable swings in monthly estimates and obtain a more complete picture of Canada's housing market. In some situations, analyzing only SAAR data can be misleading, as the multi-unit segment largely drives the market and can vary significantly from one month to the next.

Rural starts were estimated at a seasonally adjusted annual rate of 21,757 units.

However, real housing starts for the month of October paint a slightly different picture.

Starts of single-family homes in Canada’s urban areas (defined by CMHC as population centres with more than 10,000 people) were flat on a year-over-year basis in October at 5,309 units. Declines of 7% and 18% in Quebec and Ontario respectively were offset by upticks of 80% in Atlantic Canada, 19% across the Prairies and 5% in British Columbia.

Because of strong gains throughout the earlier part of 2021, single-family starts for the ten months ending in October were up 34% to 53,691 units – compared to 40,152 units for same period last year.

Gains were made in every region of the country, ranging from 21% in B.C. to 51% across the Prairies.

Multi-unit segment starts for October were tagged at a preliminary and actual 13,781 units, a comparatively modest 6% gain over the 12,983 units for same month last year. This segment includes everything from apartments to townhouses and other linked homes for both the rental and ownership market.

Once again, Atlantic Canada led the way with an uptick for the month of 282%, supported by more modest gains in Quebec and B.C. These were offset by declines in Ontario and the Prairies.

For the year-to-date, the multi-unit segment spins a similar tale with starts totalling 147,779 units, a 20% advance over the prior year’s 122,810 units. Every region of the country saw an increase, ranging from 11% in Atlantic Canada and Ontario to 33% in B.C.

This means for October 2021, total actual housing starts were set at a preliminary 19,090 units, up 4% from 18,296 units in October 2020. Declines in Ontario and across the Prairies were offset by gains in Atlantic Canada, Quebec and B.C.

In her research note, Rishi Sondhi of TD Economics (addressing the trend and seasonally adjusted figures) seemed to expect this month’s CMHC report, opined activity may also have been dragged down somewhat by on-going labour shortages. However, she pointed out building permits are holding at high levels, limiting the downside risk for starts in coming months.