OTTAWA – While actual housing starts climbed on a both a year-over-year basis for the month of September and for the year-to-date 2021, the Canada Mortgage & Housing Corporation (CMHC) maintained they declined when considering their two other measures for assessing this key driver of furniture, mattress and major appliance sales.

The agency reported its trend in housing starts was 271,068 units in September 2021, down 4.8% from 284,757 units in August 2021. This trend measure is a six-month moving average of the monthly seasonally adjusted annual rates (SAAR) of housing starts.

“The six-month trend in housing starts declined from August to September, with total starts continuing to pull back from their earlier 2021 levels,” CMHC chief economist Bob Dugan said in a statement.

“Single-detached and multi-family SAAR starts were both lower in Canada’s urban areas in September, which led to a decline in overall SAAR starts for the month. On a trend and monthly SAAR basis, however, the level of housing starts activity in Canada remains high in historical terms,” he continued, adding, “Among Vancouver, Toronto and Montreal, Vancouver was the only market not to register growth in total SAAR starts in September, due to a decline in the multi-family segment.”

CMHC uses the trend measure to complement the monthly SAAR of housing starts to account for the often-considerable swings in the monthly estimates, which are caused by the multi-unit segment that can vary significantly from one month to the next. 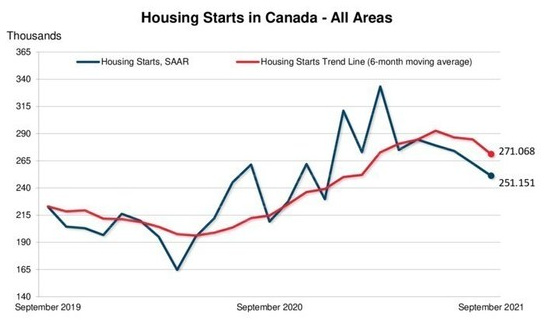 Rural starts were estimated at a seasonally adjusted annual rate of 28,096 units.

However, actual housing starts paint a slightly different picture as they climbed on a month-over-month and year-over-year basis.

The federal housing agency pegged actual starts of single-family homes – in urban centres with populations of more than 10,000 – at a preliminary 5,452 units in September. While down from the 5,796 units started in August, it’s a 9% gain from the 4,989 units started in September 2020. Starts were up in every region of the country except Quebec, where they fell 11%.

For the first nine months of the year, actual starts of single-family homes totaled 48,328 units – up 39% from the 34,849 units started over the same period last year. The uptick ranged from 23% in British Columbia to 55% in the Prairies and 44% in Quebec.

Starts in the multi-unit segment – which includes apartments, townhouses and other linked dwellings for both the rental and ownership markets – were pegged at a preliminary 14,750 units in September. That’s a gain over the 13,898 units started the prior month and up 12% over the 13,180 units begun in September last year. Advances recorded in Quebec, Ontario and the Prairies were partially offset by declines in Atlantic Canada and B.C.

For the year-to-date, multi-unit starts were tallied at 133,998 units, up 22% from the 109,827 units for the comparable period last year. Starts were up in every region of the country, ranging from 12% in Ontario to 35% in B.C. except Atlantic Canada where they dipped a measly 1%.

Total actual housing starts for the month of September climbed 11% to 20,202 units from the 18,169 units in September 2020. Gains were reported in every region of the country, except Atlantic Canada where they fell 18%.

Total housing starts for the first nine months of 2021 were up 26% to 180,382 units. Advances were made in every region of the country.

In her research note, Rishi Sondhi of TD Economics observed, based on the trend and seasonally adjusted figures, “the pace of housing starts continues to inch lower from the near-record highs observed earlier in the year. For the third quarter overall, starts were down 6.1%, with moderating permit issuance signaling some further near-term cooling ahead.

“As home sales also fell steeply, a third quarter contraction in residential investment is looking very likely, and it’s worth noting that the construction industry appears to be grappling with labour shortages,” she continued, adding the six-month trend in housing starts was measured at 210,000 units prior to the pandemic, compared to 271,000 units now. “And, with housing demand now turning around after a brief correction, prices still rising at a rapid rate, and population growth likely to pick up, home building should remain well supported.”