Home / Article: Actual housing starts up for October, but flat for the year

Actual housing starts up for October, but flat for the year

OTTAWA – Actual housing starts were up in October 2022 over the same month last year, according to the latest figures from the Canada Mortgage & Housing Corporation (CMHC), although they remain essentially flat for the year-to-date.

Rural starts were estimated at a seasonally adjusted annual rate of 21,821 units. 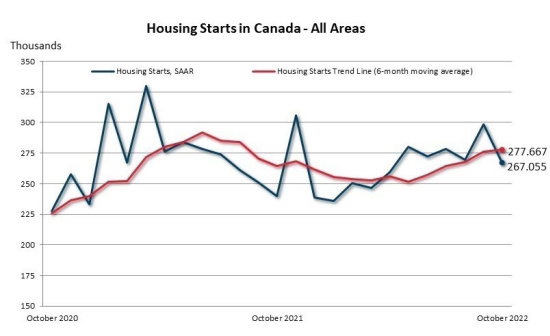 This trend measure is a six-month moving average of the monthly SAAR of housing starts and is used to account for considerable swings in monthly estimates – which are driven by the multi-unit segment of the market – and obtain a clearer picture of upcoming new housing supply.

However, actual starts of single-family homes in urban areas (defined as cities with populations of 10,000 or more) fell 7% in October to a preliminary 4,859 units compared to the same month in 2021. The decline was most keenly felt in Atlantic Canada and Quebec with only British Columbia reporting a slight increase in this category.

For the year-to-date, starts of single-family homes were also down 7% to 49,416 units from last year’s 53,585 units. The drops were steepest in Quebec and Ontario with the only gains being made in the Prairies.

Multi-unit segment starts for the month jumped 18% to 16,241 units, with upticks recorded in Ontario, the Prairies and B.C. Starts were essentially flat in Quebec but fell precipitously in Atlantic Canada.

For the period from January to October, multi-unit segment starts were tallied at 151,275 units – a year-over-year advance of 2%. The gains were highest in Atlantic Canada and the Prairies, modest in Ontario while declining in Quebec and B.C.

Thanks to the multi-unit segment, total housing starts for October were tallied at 21,100 units – up 11% over the 18,926 units recorded for the same month last year. Declines in Atlantic Canada and Quebec were more than offset by gains in Ontario, the Prairies and B.C.

However, for the year-to-date total housing starts were essentially flat on a year-over-year basis at 200,889 units. Regionally, declines in Quebec, Ontario and B.C. were offset by gains across the Prairies and in Atlantic Canada.

In her research note, Rishi Sondhi of TD Economics, said housing starts continued to be healthy, buoyed by elevated prices and low levels of unsold new home inventories and decline in the SAAR suggests a decline in fourth quarter residential investment, a trend that reinforced by downtrend in the issuing of building permits across the country.

“Such an outcome would be consistent with our forecast calling for a moderation in the pace of starts in 2023, as higher interest rates and past declines in demand weigh on homebuilding,” she opined.