OTTAWA – While the trend in housing starts was up slightly in September over August, the latest data from the Canada Mortgage & Housing Corporation (CMHC) shows they fell on both an actual and a seasonally adjusted basis.

The federal housing agency said the trend in housing starts was 214,647 units in September 2020, up from 212,609 units in August 2020. This trend measure is a six-month moving average of the monthly seasonally adjusted annual rates (SAAR) of housing starts.

“The national trend in housing starts was largely unchanged in September,” CMHC chief economist Bob Dugan said in a statement. “Multi-family starts have been very volatile in recent months, partly reflecting the impact of COVID-19. High levels of multi-family starts in July and August were largely offset by lower levels in September, leaving the trend largely unchanged. This pattern was particularly evident in Ontario, including Toronto. We expect national starts to trend lower by the end of 2020 as a result of the negative impact of COVID-19 on economic and housing indicators.” 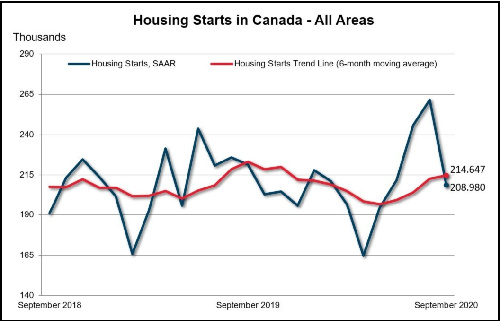 CMHC uses the trend measure as a complement to the monthly SAAR to account for the considerable swings in the estimates caused by the multi-unit segment where starts can vary significant from one month to the next.

Rural starts were estimated at a seasonally adjusted annual rate of 13,071 units.

Preliminary data showed actual starts of single-family homes in urban areas – which the agency defines as cities with populations of 10,000 or more – climbed 6% in September to 4,989 units, from 4,716 units in September 2019. They were up in Atlantic Canada, Quebec and Ontario but fell across the Prairies and in British Columbia.

For the year-to-date single-family starts totalled 34,839 units – a slight 1% gain over the 34,374 units recorded for the first nine months of last year. Once again, the regional difference was quite pronounced with upticks across central and eastern Canada and declines throughout the west.

Multi-unit starts – which includes apartments, townhouses and otyher linked housing for both the condominium and rental markets – were set at a preliminary and actual 13,189 units in September, a 9% over from the 14,417 units started in September 2019. Starts were down in every region of the country except Quebec, where they were up 26%.

For the first nine months of the year, starts in this segment totalled 109,828 units – a 2% decline from the 112,395 units started during the same period last year. Regionally, starts were up in central and eastern Canada and down significantly across the west.

For the month of September, total housing starts were set at a preliminary 18,161 units, down 5% from 19,133 units during the same month last year. For the year-to-date, total housing starts tallied 144,666 units, down 1% from 146,729 units for the same period last year. Once again, starts were up in Atlantic Canada, Quebec and Ontario but down across the Prairies and B.C.

In her research note, Rishi Sondhi of TD Economics pointed out that despite their decline from August, September housing starts “marked yet another month of healthy homebuilding activity” and should support overall GDP growth for the third quarter of 2020.

“Moving forward, past pre-construction sales gains and low rates should ensure that starts remain elevated through next year,” she said, adding, “Afterwards, some slowing may take place as softer population growth brought upon by the pandemic weighs on housing demand, and ultimately, homebuilding.”