OTTAWA – When measured on a seasonally adjusted basis or by its trend method, the Canada Mortgage & Housing Corporation (CMHC), housing starts were up for the month of June 2020. However, actual housing starts have fallen everywhere in the country during over first seven months of year, expect in Ontario, primarily because of government imposed shutdowns made in response to the COVID-19 pandemic.

The federal housing agency said the national trend in housing starts was 199,655 units in June, up from 197,063 units in May 2020. The trend measure is a six-month moving average of the monthly seasonally adjusted annual rates (SAAR) of housing starts.

“The national trend in housing starts increased in June,” CMHC chief economist Bob Dugan said in a statement. “This reflects higher multi-family starts in Toronto and Montreal following declines in these centres in recent months from COVID-19 measures. Housing starts continued to decline in most other centres in June, including Vancouver. We expect national starts to trend lower in the near term as a result of the negative impact of COVID-19 on economic and housing indicators.” 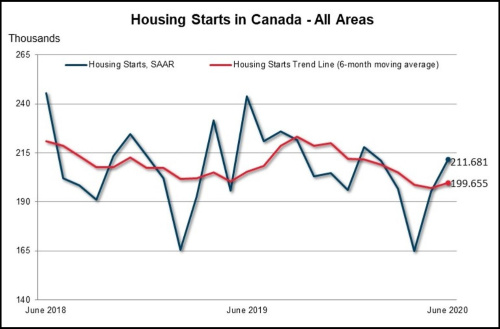 CMHC uses the trend measure to complement the monthly SAAR of housing starts. In some situations, analyzing only SAAR data can be misleading, as they are largely driven by the multi-unit segment of the market which can vary significantly from one month to the next.

Rural starts were estimated at a seasonally adjusted annual rate of 15,006 units.

However, looking at the preliminary figures for actual housing starts paints a slightly different picture.

CMHC data show starts of single-family homes were estimated at a preliminary 4,577 units in June, down 13% from the 5,332 units started in June 2019. They were down in every region across the country, except Quebec where they were up 3%.

For the first six months of the year, single-family starts were totalled at 20,348 units, a slight 1% edge over the 20,124 units started during the same period last year. Building activity fell in every region except Ontario, where they gained 12% and Atlantic Canada, which was up 6%.

In the multi-unit segment, actual starts were down 13% at a preliminary 14,158 units – compared to 16,316 units in June 2019. Starts were up in Ontario and Quebec, but down dramatically in Atlantic Canada, the Prairies and British Columbia.

For the year-to-date, multi-unit starts were tallied at 63,349 units, a 9% drop from the 71,573 units from the comparable period last year. Once again, starts were down in every region except Ontario, where they up 13% year-over-year.

Total housing units for June 2020 were set at preliminary 18,833 units – a 13% decline from 21,548 units started in the same month last year. Starts were up in Quebec and Ontario but down across the rest of the country.

“Although down from the lofty heights achieved in recent years, homebuilding has thus far been resilient through the pandemic,” Rishi Sondhi of TD Economics observed in her research note. “And, June’s solid print reinforces this trend. This is a much different result from some of the more bearish forecasts out there and represents a stark change from most other industries, which cratered earlier on and are just now beginning their slow recovery process.”

She pointed out the recovery in housing is, at least in part, a function of solid demand in the months and years leading up to the pandemic. “We expect this prior demand strength to keep homebuilding activity afloat through the remainder of the year and into 2021,” she said, noting industry data points to a strong increase in pre-construction sales in key markets over the last year, which should continue feeding through into homebuilding.

However, she also cautions “over the medium term, starts should ease as population growth slows.”

Priscilla Thiagamoorthy of BMO Economics appeared to agree, writing: “Unlike most other sectors, housing starts (with the exception of Quebec) largely remained resilient through the pandemic and have rebounded nicely. However, looking further ahead, homebuilding activity hinges on the strength of population growth.”