TORONTO – On an actual basis, housing starts fell for the fourth consecutive month in April, according to figures published by the Canada Mortgage & Housing Corporation (CMHC). However, the agency noted starts climbed by its trend measure as well as on a seasonally adjusted annual rate (SAAR).

“On a trend and monthly SAAR basis, the level of housing starts activity in Canada remains historically high, hovering well above 200,000 units since June 2020 and increased from March to April,” CMHC chief economist Bob Dugan said in a statement. “The increase in monthly SAAR housing starts in Canada's urban areas was driven by higher multi-unit and single-detached starts in April. Among Montreal, Toronto and Vancouver, Toronto was the only market to post a decrease in total SAAR starts, which was driven by lower multi-unit and single-detached starts.” 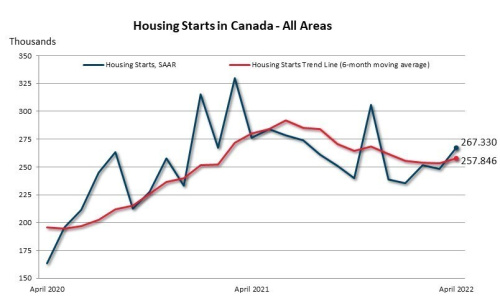 CMHC uses the trend measure as a complement to the monthly SAAR to account for the often-considerable swings in the monthly estimates because in some situations, analyzing only SAAR data can be misleading. This is because the multi-unit segment largely drives the market and can vary significantly from one month to the next.

Rural starts were estimated at a seasonally adjusted annual rate of 22,006 units.

CMHC pegged actual starts of single-family homes in urban areas (defined as towns with a population of 10,000 or greater) at a preliminary 5,527 units, an 11% drop from the 6,184 units in April 2021. The drop was registered in every region of the country except Atlantic Canada and British Columbia, where they gained 20% and 17% respectively.

For the first four months of 2022, total single-family starts totalled 16,116 units – down 14% from the 18,773 units for the same period last year. The decline was felt in every region of the country, ranging from a low of 3% across the Prairies to 32% in Quebec.

The decline in single-family homes was at least partially offset by a slight uptick in the multi-unit segment of the market – which includes apartments, townhouses and other forms of linked dwellings. The agency said preliminary starts in this category totalled 15,248 units, a 4% advance over the 14,604 units started in April 2021.

However, the uptick was regionally divided with Prairies and B.C. registering upticks with declines felts in Ontario, Quebec and Atlantic Canada.

For the year-to-date, starts in the multi-unit segment were down 12% to 49,642 units from last year’s 56,517 units. The drop was felt in every region of the country except across the Prairies where they were up 19%.

Total housing starts for the month of April were essentially flat on a year-over-year basis at 20,775 units, compared to 20,788 units. Declines in Atlantic Canada, Quebec and Ontario were offset by gains in the Prairies and B.C.

But for the year-to-date, total actual housing starts declines 13% to 65,758 units from the 75,290 units started over the first four months of 2021. Once again, the drop was felt in every region of the country except across the Prairies where they were up 9%.

In her research note, Rishi Sondhi of TD Economics appeared enthusiastic about the Canadian housing market, particularly when looking at the seasonally adjusted figures published by CMHC and noting, “homebuilders continue to break ground at a solid pace.

“This reflects an elevated price backdrop, lean inventories in the new home market, and past sales gains,” she continued, adding, “And lofty permit issuance points to this rate being sustained in the near-term. The only nit to pick here is that April's gain was not broad-based across provinces.”

However, she did caution that when looking past the near term, “starts should gradually decline, reflecting higher interest rates that weigh heavily on demand and increase builders’ financing costs.”

She also noted starts have already trended lower from the multi-decade high observed early last year although she also believes home building could receive a boost from the policies announced in the recent federal budget which may put some downward pressure on home prices. “However, the federal government’s stated intention of doubling the current pace of homebuilding over the next decade looks like a stretch, as it would imply a run of never-before-seen construction levels,” she added.