AICEP, the Toronto office of the Portuguese Trade & Investment Commission brought samples of furniture, mattresses, accessories, linens and other home goods manufactured by some 18 or so companies seeking to establish ties with Canadian retailers and distributors.

In naming its display as the best in the show, the jury applauded the booth for its “great use of colour and space” and noted its “products were on trend and well displayed with great use of layering and accessories.” 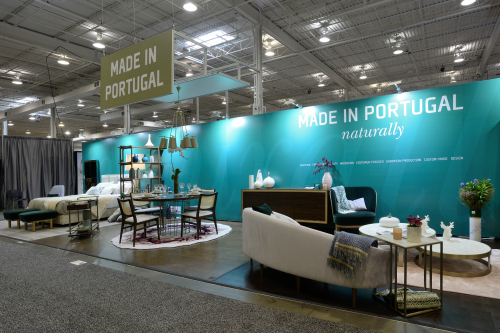 This was the third consecutive year in which CFS organisers held a best booth competition although the 2018 version was somewhat different from those held in prior years. The displays weren’t placed in categories based on size, but rather eight categories based on merchandising and design principles were selected.

To be selected as the recipient of the Best Booth award, for example, the jury wanted to see a display that was “a show stopper, a booth everyone is talking about.”

The winner of the award for Best Visual Display was O-Palier, Iroquois, Ontario-based manufacturer of dining room furniture and occasional chairs. “The booth was well displayed from all sides,” the jury said. “Products were elevated at various levels.”

The company was also praised for displaying the chairs in one colour, which emphasised made it easy to identify the different styles and chairs being offered.

The Best Use of Colour award were to Duke Trade and Investment of Milton, Ontario – a specialist in designing, producing and selling decorative pillows and other related home décor products.

The judges applauded the display for its “great display of colour, without being overwhelming” while noting the “product was merchandised by colour very effectively.”

In the Best New Exhibitor category there was a tie between Marie Dooley Home and CUTIS (the Canada-Ukraine Trade & Investment Support Project).

The judges saluted Marie Dooley Home – a Quebec City-based supplier of home textiles such as throws, pillows, curtains and linens – for the “simple and elegant use of displays and product in a small space…specifically, the use of the storage boxes to create a simple yet cost-effective display.”

CUTIS was cited for having a “well-laid out plan using the concept of an apartment” as well as for the “great use of areas to gather and meet.”

For the Best Design award, the judges picked Style in Form, a Burnaby, British Columbia-based furniture resource that was cited for having a well-layered display that was “on trend with colour, textures, shapes, patterns.”

The award for the Best Traffic Builder went to another first time exhibitor, Xtraroom of Oakville, Ontario.  The Murphy bed specialist was cited for its “on-point use of visuals to pull attendees in and easily explain the concept of their product.” They were also praised for creating a clean and simple display that allowed the product to stand out.

Finally, the jury also gave an award for the Best TIDC Showroom. TIDC or Toronto Interior Design Centre is the new name for the International Centre’s permanent showroom annex, previously known as SOFA.

This was also a tie between the newly opened Guild Design Gallery and area rug specialist Minster Interiors.

The jury reviewing the exhibitor booths on display throughout the International Centre included: Rosamund Kavander; a designer and colour marketing specialist; Vicky Sanderson, journalist and freelance contributor to the Toronto Star as well as Home & Condos and Reno & Décor magazine; Martin Slofstra, editor of the New Homes and Condos section of the Toronto Sun; and, Melisa Tossel, owner of the Toronto-based Sanura Design, a residential design specialist.

Click here for more about the CFS booth awards.