OTTAWA – In what is to surely be greeted as welcome news by this country’s furniture, mattress and appliance industry, year-to-date sales via its Multiple Listing Service (MLS) have already exceeded those written in 2020, according to the latest figures from the Canadian Real Estate Association (CREA).

The realtors’ group reported national home sales rose 8.6% on a month-over-month basis in October – marking the largest month-over-month increase since July 2020. Sales were up in about three-quarters of all local markets and in all major cities across the country.

The number of properties listed for sale climbed 3.2% from September to October. 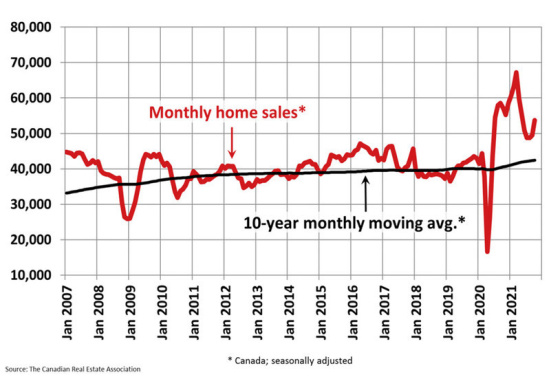 The actual (not seasonally adjusted) number of transactions in October 2021 was down 11.5% on a year-over-year basis from the record for that month set last year. That said, it was still the second highest ever October sales figure by a sizeable margin.

On a year-to-date basis, some 581,275 residential properties traded hands via Canadian MLS Systems from January to October 2021, surpassing the annual record of 552,423 sales for all of 2020.

“After a summer where it looked like housing markets might be calming down a bit, October’s numbers suggest we might be moving back towards what we saw this spring, with regards to current market demand and supply conditions,” CREA chairman Cliff Stevenson said in a statement. “That said, one month of data is not a trend, so we'll be watching how the balance of this memorable year plays out closely.”

“2021 continues to surprise. Sales beat last year’s annual record by about Thanksgiving weekend so that was always a lock, but I don’t think too many observers would have guessed the monthly trend would be moving up again heading into 2022,” CREA senior economist Shaun Cathcart added.

“A month with more new listings is what allows for more sales because those listings are mostly all still getting gobbled up; however, with demand that strong, the supply of homes for sale at any given point in time continues to shrink. It is at its lowest point on record right now, which is why it’s not surprising prices are also re-accelerating. We need to build more housing,” he continued.

The number of newly listed homes rose by 3.2% in October compared to September, driven by gains in about 70% of local markets. With so many markets starved for supply, it’s not surprising to see sales go up in months when more properties go up for sale.

There were just 1.9 months of inventory on a national basis at the end of October 2021, down almost half a month from three months earlier and back in line with the all-time lows recorded in February and March of this year. The long-term average for this measure is more than five months.

In her research note, Rishi Sondhi of TD Economics, said CREA’s strong report “reinforced the fact that the housing market still carries significant momentum. In addition, October’s solid showing probably didn’t receive much of a boost from buyers pulling forward purchases ahead of higher rates, as the Bank of Canada didn’t communicate its more hawkish tone until very end of the month.”

She also opined further interest rate increases will be needed to meaningfully moderate demand and believes they will come.

“However, sales levels are likely to remain healthy through next year, supported by firm economic and income growth, a rising population and elevated household savings (some of which should flow into down payments). Also, a large chunk of the population has aged into what has historically been prime home buying years,” Sondhi wrote.

But she did point out that although new listings were up in October, they have generally been flat for the past several years and have struggled to keep up with pandemic-era demand. “This relative lack of supply may be preventing even stronger sales growth, while helping keep resale markets drum tight,” she said, adding, “ In addition, even markets for newly built homes are tight. In this environment, prices should continue to climb next year even as rates push higher.”