OTTAWA – National sales of existing homes via its Multiple Listing Service (MLS) set new record highs for both the month of December and the entire 2020 year, according to figures released recently by the Canadian Real Estate Association (CREA). The national average price also set a new record benchmark.

The realtors’ group reported sales rose 7.2% on a month-over-month basis in December, driven by gains of more than 20% in Canada’s two largest and most expensive markets – the Greater Toronto Area (GTA) and the Greater Vancouver Area (GVA). Indeed, on a seasonally adjusted activity was running at an annualised pace of 714,516 units in December, the first time that measure topped the 700,000 unit mark.

New listings rose 3.4% on a month-over-month basis in December.

Actual (not seasonally adjusted) sales posted a 47.2% year-over-year gain in December, the largest year-over-year increase in monthly sales in 11 years, setting a new record for the month by a margin of more than 12,000 transactions. Sales were up in almost every local Canadian housing market for the sixth straight month compared to the same month in 2019. 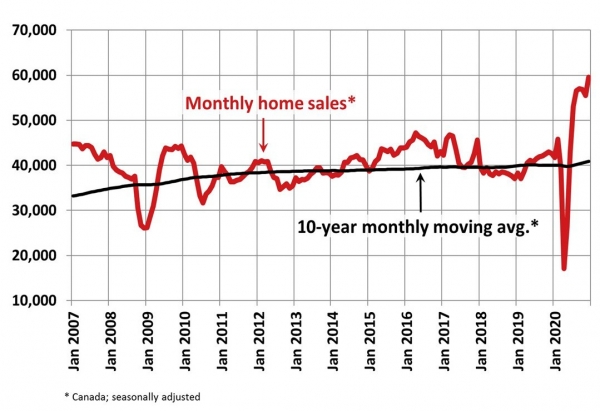 “It’s official, despite all the challenges, 2020 was a record year for Canadian resale housing activity,” CREA chairman Costa Poulopoulos said in making the announcement.

“The stat to watch in 2021 will be new listings, particularly in the spring – how many existing owners will put their homes up for sale?” CREA senior economist Shaun Cathcart said. “We already have record-setting sales, but we know demand is much stronger than those numbers suggest because we see can see it impacting prices.

“On New Year's Day there were fewer than 100,000 residential listings on all Canadian MLS Systems, the lowest ever based on records going back three decades. Compare that to five years ago, when there was a quarter of a million listings available for sale,” he continued, “So, we have record-high demand and record-low supply to start the year. How that plays out in the sales and price data will depend on how many homes become available to buy in the months ahead. Ideally we’d like for households to be able to find and acquire the homes that best suit their needs and for housing to remain affordable, but the fact is we’re facing a major supply problem in 2021.”

The association also reported the number of new listings climbed 3.4% in December over November, most of which came from the same parts of the country reported the largest sales gains for the month. Based on the current rate of sale, there were only 2.1 months of inventory on a national basis available to potential buyers at the end of December – the lowest reading on record for this measure. At the local level, 29 markets in Ontario were under one month of inventory as 2020 ended.

“What a fitting end to a surprisingly strong year,” Rishi Sondhi of TD Economics remarked in her research note. “Relative strength in high-wage employment, record low mortgage rates, rising supply of homes available for purchase and solid demand for larger units all supported exceptional sales and price growth last year. Looking ahead, we’re expecting sales and prices to cool somewhat from their robust pace in the first quarter. However, December’s surprisingly strong performance makes hitting our forecast a tougher proposition.”

She also noted consumer demand for detached houses remained robust as the year closed even as sales continued to be elevated in Canada’s larger markets.

“January will be an interesting month as we’ll be looking for signs that activity has been impeded by the stay-at-home order issued by the Ontario government,” Sondhi added. “Our first thought is that any impact would be minimal, given that showings are still allowed (although open houses continue to be restricted) and activity has thus far been robust through the pandemic.”